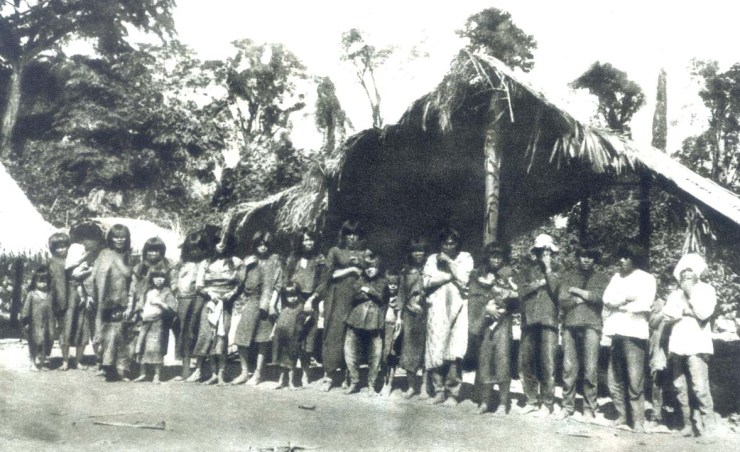 A number of ethnic groups lived in Madre de Dios prior to European contact (e.g., Ese Eja, Machiguenga, Amarakaeri, Purú, Piros), and archaeological evidence dates the Harakmbut as the earliest inhabitants of the region (between 500-1000 BP; see Aikman 1983; Gonzáles del Río 1973). Archaeological and historical ecological fieldwork in the region has only commenced in recent decades as prehistoric settlements became more visible as a result of deforestation and growing popularity of using areal photography and satellite imaging in archaeology (Denevan 2001; also see Erickson and Balée 2006). Inter-regional commerce was common between the lowland region of Madre de Dios and Peruvian Andes during the times of Tawantinsuyu (the Inca Empire), but the region was not annexed into either two of the empire’s adjacent states, Antisuyo or Kollasuyo (Moore 1985). 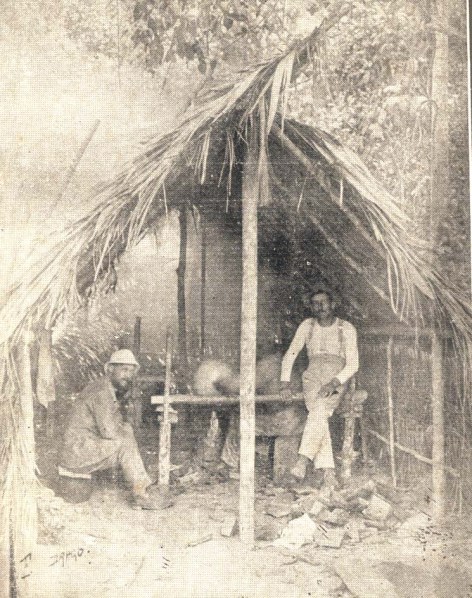 Madre de Dios had a longer pre-contact period than other frontiers, which is often described as a consequence of the “inhospitable landscape” that insulated native inhabitants from colonialism, national expansion projects, and other processes that profoundly shaped history in other parts of Amazonia Peru (Huertas 2004:26; also see Moore 1985). A geographically deterministic argument is not a sufficient explanation, but isolation has been a powerful variable in rendering Madre de Dios one of the last frontiers, with depictions of “uncontacted” tribes, a “Wild West” gold rush aura currently around the region’s capital city, and a relatively short but dark history as a periphery in the contemporary global economy. During the colonial era of Peru, the Spanish crown was unsuccessful at political expansion south and east toward Madre de Dios. In the seventeenth century, friars coming from the north in Marañón used ancient ‘Indian routes’ to establish mission routes and mule trails southward to colonize the region between Rio Marañón in the north and Rio Madre de Dios in the south, but indigenous resistance effectively halted Franciscans from reaching Madre de Dios (Eidt 1962:258-259). Puerto Maldonado, the capital city of Madre de Dios, is named after a Cusqueño (someone from the Department of Cusco) Coronel Faustino Maldonado, who explored the waterways of the Madre de Dios in 1859 and “perished in the rapids of the Calderon del Infierno” (Toppin 1916:85). Madre de Dios remained relatively disconnected from the rest of the globe until the advent of the twentieth century.

“Rubber fever” transformed Madre de Dios into an important frontier and extractive periphery. In 1894, large concentrations of high quality rubber were discovered in the Madre de Dios region, and soon after, Bolivia attempted to establish customs houses at the confluence of the Manú and Madre de Dios rivers, a gesture that initiated border disputes between Peru, Brazil, and Bolivia. The control of access to Hevea and Castilloa trees during the Amazonian rubber boom (ca 1860-1920) motivated diplomatic entanglement over state ownership of the frontier. Rubber from Amazonia accounted for at least 60 percent of the global rubber supply and South American countries vied over resource rich areas along nebulous borders (Little 2001). After many deliberations in the Argentinean court, Peru and Bolivia signed an agreement that defined national boundaries by a geodetic line from the confluence of the Heath and Madre de Dios rivers. Political contest over natural resources led to the social production of Madre de Dios as a frontier.

Publications on the rubber boom in Madre de Dios are exiguous and difficult to obtain. Flores (1987) provides a detailed synthesis of information based on a host of sources, such as late 19th century articles published by “El Boletín de la Sociedad Geográfia de Lima” and old correspondences between management of Tambopata Rubber Syndicate and other parochial agencies during 1907-1913, the peak years of the rubber boom in Madre de Dios. A few popular works have documented atrocities in other parts of Amazonia (including Northern Peru) during the ‘rubber fever.’ The most notable work is Sir Roger Casement’s (1911) Heart of Darkness, which (radically for its time) locates the Amazon and Congo rivers at the turn of the twentieth century as peripheries of exploitation. W.E. Hardenburg’s  (1912:11) The Putumayo: The Devil’s Paradise bears witness to “scene[s] of ruination and wholesale torture and murder of tribes of its defenseless and industrious inhabitants.” These publications exposed the rubber industry as a system of semi-legal slavery. 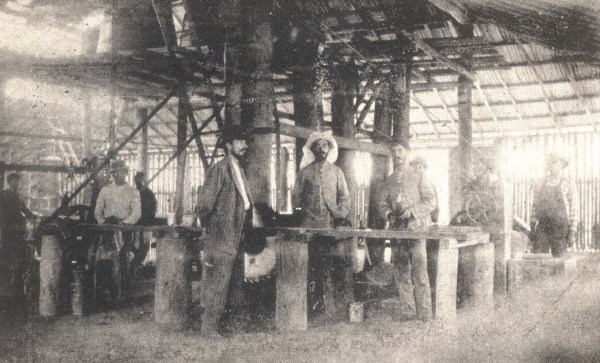 Slavery and debt-peonage constituted the system of labor from which the rubber industry was built. Jesuits had tacit cultural knowledge of two worlds to broker relations of production between Caucheros (rubber bosses) and the indigenous obreros (laborers, in this case rubber tappers). Debt-peonage was important because the obreros lacked a monetary system to sell their labor (Taussig 1986). Illiterate native populations were coerced into signing employment contracts, unwittingly guaranteeing their labor to rubber companies sometimes initially for up to two years, but obreros became stuck in an endless cycle of debt as the value of their production could not subsidize the inflated price of their consumption (e.g. food, utensils, machete, rifle, etc). Thus, people were effectively forced into slave labor for the rest of their lives. Some natives were sold outright as slaves, priced by age and sex; a boy of 10 to 12 yrs cost 500 soles, a girl the same age cost 300 soles, and slaves older than 20 yrs cost even less (Flores 1987). The workforce in Madre de Dios was not autochthonous; many individuals of different ethnic affiliations were transported across vast distances in Amazonia to work in the Madre de Dios region (Alexiades 2009:22).

Economies developed around extraction as more people came into the region. In 1912, the Peruvian government led an expedition to forge the path for colonists to move deeper into Madre de Dios. Puerto Maldonado was established as the capital of the region that year and the first townsmen were caucheros and obreros (Reyna 1942). An economy around rubber began to develop. ‘Airmen’ were traders in the rubber boom who “enabled people seeking to slingshot into the jungle.” In exchange for large amounts of rubber (traded in fabricos,) the ‘airmen’ provided flour, salted meats, beans, sugar, coffee, eating utensils, shotgun, and in some cases, even a concertina (Flores 1987:22). It was also possible for caucheros to buy cigarettes, Vermouth, English cookies, and other fine commodities (Casaverde 2008). Although caucheros are associated with production, understanding how they became consumers in an economy developed around extraction is key to understanding Madre de Dios today. Richard Wilk (2006:150) contends that “new patterns of consumption can help preserve existing cultural institutions, cause radical change and abandonment of cultural practices, or forge new “creolized,” hybrid, or complex mixtures that are simultaneously new and old, local and global.” Madre de Dios bodes well as a site for the study of a ‘cosmopolitan culture’ of consumption, whether in the past or present social landscape.

Madre de Dios experienced its first boom and bust cycle with rubber. Production and consumption of rubber expanded exponentially during the twentieth century as England and Holland established large plantations throughout Southeast Asia, (e.g., Malaysia, Burma, Java, Singapore, Sumatra, Thailand, the Philippines, and India). The international price collapsed as plantation rubber from these countries flooded the world market (Alexiades 2009; Coomes and Barham 1994). During the peak years of the rubber boom, tropical Latin America supplied most rubber in the global marketplace. Only seven percent of rubber came from the Americas by the 1920s, and the first ‘modern’ (i.e. subjects of capital) Madredediosenses had to find another means for sustenance. 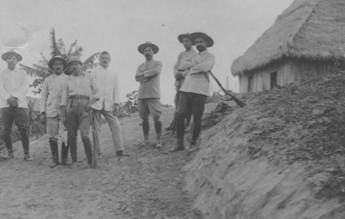 The demise of the caucho industry in Amazonia did not signify the end of extraction; it opened new economic opportunities and extraction became a prototype for future modes of production to emulate. Once again, missionaries (this time Dominicans) mediated obreros and patrones (bosses) by creating “small agro-extractive estates” (Alexiades 2009:228), including cassava, plantains, lemons, coffee, sugar, but also rice crop experiments conducted by Japanese migrants. During the early to mid twentieth century, commercial extraction shifted to other valuable natural resources, such as furs and skins, Brazil nuts, and during the final decades of the twentieth century to timber (e.g., mahogany and cedar), alluvial gold, and petroleum. The peopling of Madre de Dios remained at steady at 25,000 for decades until the 1970s, when colonios moved into the region to start plantations after land reforms encouraged migration to rural areas (INEI 2009). The capital city of Puerto Maldonado was a small farming town with less than 3,000 denizens in the 1980s. Within a decade, the population in Madre de Dios nearly tripled and local economies diversified to support the influx of migrants from Bolivia, Brazil, and other regions of Peru.