One of the new elective courses I developed at Humboldt State University as a special topics course is entitled: “Living in the Anthropocene: Environmental Change & the Human Condition.” This course critically examines relationships between environment, health, and society, with a particular focus on the effects of globalization and development on these themes. This class is designed around several environmental issues, including climate change, water pollution and waste, energy, and disasters (such as wildfires, floods, and hurricanes). Students gained theoretical knowledge of core anthropological ideas related to the anthropocene (including its critiques), infrastructures, embodiment and health, indigeneity and decolonization, and socionatural worlds.

Students from my Anthropocene course visited HSU’s Wildland Fire Lab, which is one of 3 fire labs in the United States. Students learned about fire ecology (fire as a selective pressure, fire adapted plants, etc.) and the failed policy of fire suppression (informed by Western perspectives) as well as how colonization and genocide of Native Peoples who previously managed landscapes through prescriptive burns have led to our contemporary challenges of unpredictable and highly destructive wildfires. 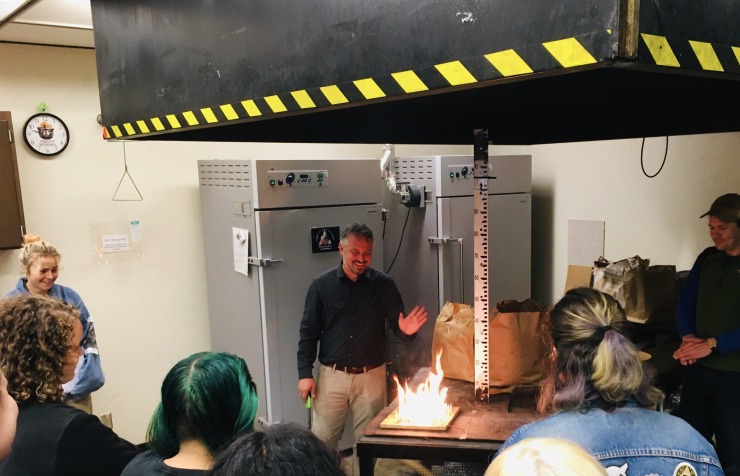 The final semester assignment was designed to give students more freedom to express their own learning and synthesize course material related to environment, health, and society. They used recycled objects to create works of art (e.g. collages, composite sculptures, photo essays, performance song & dance, etc.) that related to their research on a local environmental issue and, more broadly, expresses what it means to live in the Anthropocene.

Their artwork explored aspects of and relationships between environment, health, and social life and build upon course concepts and themes. Each art piece was accompanied by a written artist statement and brief description of the work. The class hosted a public art show at the HSU library to feature students’ creative works.

As I announced to the artists and guests when the exhibit was officially open:

“When I was a student of anthropology, I found that there were few opportunities for me to mobilize my own creative proclivities in the classroom, despite all the lip service paid to our prideful discipline as ‘the most humanistic science, and most scientific of the humanities.’ I happen to really appreciate this peculiarity about anthropology, which was, in part, why we learned about fire ecology and the importance of serotinous cones at the same time that we learned about co-construction of new masculinities among imprisoned wildfire laborers who braided each other’s hair and created new forms of kinship. Studying the Anthropocene lured us into unexpected narratives of deadly border crossings, of the mental health effects of Indigenous land dispossession, of agentive mountains, aquifers, rivers, mining pits, and glaciers, of gender-based violences around extractive labor camps, of social organizing and direct action. The anthropocene, as we have studied it, undermines the arbitrary, often Euro-centric thinking to divide and objectify culture and nature as distinct ontologies. It beckons us to consider the past five hundred years of colonialism, the mutual exploitation and disposability of peoples, plants, animals, ecosystems, sediments and mountainsides. The Anthropocene is about both deep violence and hope, an old world dying and a new one reborn. The artwork presented here is, in part, shaped by these narratives of living in the Anthropocene.”